Something a little softer than stone

29 Oct Something a little softer than stone

Posted at 14:38h in Stoneface by Stoneface creative 0 Comments
2 Likes

Sadly last week we had to fell a huge Birch tree in the woods as it had a rotting disease known as Ganoderma. This had caused the tree to become week at the base and as it was positioned above a main road it was unsafe to leave it standing. However it wasn’t until the tree was taken down we realised how much of this fungus there actually was, This gave Stoneface an idea, seeing as though we are constantly creating things using different and unique materials why not try and create a sculpture out of Papier-mâché from the fungus inside the tree. So ideas for what was going to be created began and after doing some research we found out that in mythology Beech is associated with femininity and is often considered the queen of British trees, where Oak is seen as the king. From this information of the beech being associated with femininity Stoneface decided on the idea of a sun worshiper also as trees wouldn’t be able to grow without sunlight it would make a fitting tribute to the beech tree that had to be cut down.

Now the idea was in place is was time to begin working on creating the Papier-mâché this was done by soaking the fungus for a couple of hours then blending it together to create a paste, once the paste was ready a wire frame was created as a base to witch the paste was applied. As the sculpture itself was so wet it took around 3-4 days to fully dry to create the sun worshiper. 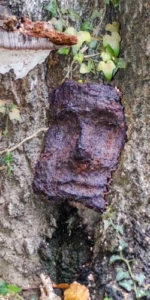 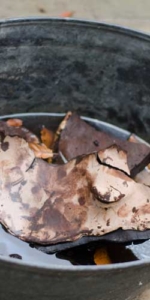 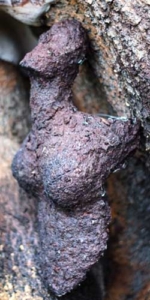